When we think about who we are, we tend to think that we stop at the outer perimeter of our bodies – so for example, I am a person, I have a body, arms, legs and so on, and thats it. Everything outside of that is something else, someone else or somewhere else. But that is mostly based on feeling and sight – we can only feel those parts of ourselves, and we can only see those parts of ourselves against the backdrop that is the rest of the world. So we assume those boundaries define our physical presence in its entirety.

However, if you take away the constructs of sense and assume that we can only appreciate the world with the senses that we have, but that the world is not necessarily defined only by those senses, then you could believe that its possible for us to encompass more than what we can physically see.

For example, there is no space between us and the closest object to us – there is no vacuum in between those two things, but rather a continuous series of atoms and matter. So there is never a gap, the entire world is one and could, in theory, be one single thing, one single being.

Even if we are not all part of the same thing, we are most definitely connected to each other in some way – if you move your hand towards a nearby tree for example, there is a domino effect that starts with your hand and finishes at the tree – as your hand moves it must touch the air surrounding it, that air is in turn connected to the tree, to everything in fact. So as you move your hand, you are having some effect on the tree, even if it is tiny and perhaps not even measurable, that effect still exists. 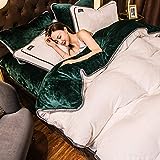 2 Replies to “Are We All Connected?”